Many professional traders choose to trade pairs of stocks which usually closely follow one another. When the prices of the pair diverge a significant amount, the lower priced stock is purchased and the higher stock is shorted in hopes of a later price convergence. It is not always easy to find an acceptable relationship between stocks you would like to trade, however. If the prices of stocks themselves do not provide a nice spread relationship, it is possible to make an algebraic modification of one of the pairs to provide a relationship that is better and easier to trade in a market neutral fashion.

In the sequence of charts that follow, we have loaded the prices of several stocks into the NeuroShell Trader Professional for data collection, display, and subsequent trading, but many other platforms will work as well. In some cases we have simplified the arithmetic involving constant terms before displaying in NeuroShell. For example, XOM - ( SPLS - 3.42231 - 6.101346) is simplified to XOM - SPLS + 9.5. Therefore some computations below may only be approximate.

Also in the profit computations that follow we are ignoring commissions, slippage, and fees. We did not verify that the stocks we used did not experience stock splits during the times we analyzed them, but you should either not use periods with splits or back adjust for them.

In this example we wanted to find a spread relationship to trade Microsoft. We loaded about 6 technology stocks into NeuroShell to obtain price histories, and then exported them for loading into ChaosHunter. We instructed ChaosHunter to find a formula to compute the price of MSFT based upon these 6 stocks. ChaosHunter picked only CSCO to make the computation and came up with: 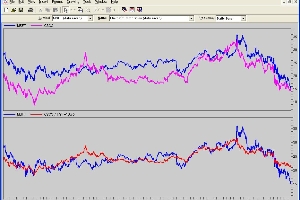 The top subgraph of the chart above shows the relationship between MSFT and CSCO with raw prices. The bottom subgraph shows MSFT and MSFT computed from CSCO. It should be obvious from the graphs that MSFT computed from CSCO may provide different pair spread trading opportunities than using the raw prices. You buy and sell the two stocks when the price of MSFT is out of line with the computed price based on CSCO

It must be emphasized that the price computation is an average based upon the time period over which the stocks are analyzed, and different formulas might be obtained if shorter and/or intraday periods are analyzed.

In this example we set out to do pairs trading with pharmaceutical stocks. We loaded and examined Wyeth, Glaxo, and Bristol-Meyers. 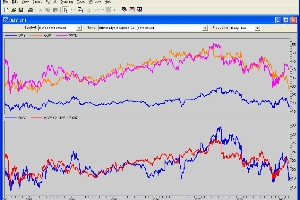 As you can see by the top subgraph of raw prices, WYE and GSK are pretty good pairs trading partners already. But suppose we wanted to trade BMY? It is hard to see how to do any pairs spread trading from the raw prices. So we loaded the data into ChaosHunter to see if the price of BMY could be computed by using the other two. Again, ChaosHunter found that the best relationship used only one stock, WYE, and came up with:

Still hoping to be able to demonstrate a case where a more complicated relationship might be necessary, we chose a number of stocks that are in different industries to find a relationship for Colgate-Palmolive. We loaded CL along with XOM, SPLS, WYE, and SWK. 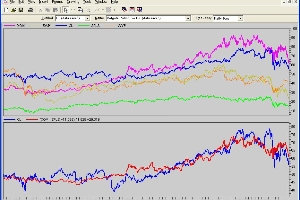 It wasn't long before ChaosHunter computed:

We still have a simple linear formula, but this time a couple of stocks produced a better relationship than just a single stock. If we had let ChaosHunter run longer it is possible it could have either dropped one of the stocks in the formula or added another, probably without significant change in the effectiveness of the formula, however.

Financial trading comes with substantial risk of loss, including possible loss of principal and other losses, even when using computerized trading methods, formulas, and systems. Success of a formula or trading method in the past does not guarantee or even imply success in the future. The use of any trading system or strategy does not and cannot guarantee that you will make profits, increase profits or minimize losses. Additionally, trading results based upon hypothetical or historically-tested trading systems do not necessarily compare to results of actual trading. No hypothetical or historical trading record can completely account for the level of risk present in actual trading. There is no guarantee that your hypothetical trading results, even if tested against historical data, will produce comparable actual trading results. In fact, there are frequently sharp differences between hypothetical or historically-tested performance results and the actual results subsequently achieved by any particular trading system or strategy. You agree that you understand the risks.